Then Titletown MMA Academy and RoufusportGB fighter Jacob Jossart will look to prove himself once again. His debut fight against Nelly Thompson didn't go as planned with a doctor stoppage. But he was always in the fight, and managed to stay against a more veteran opponent for an extremely tough debut. Jacob spent his wrestling career with the Bayport High-school team, then followed onto pursuing a career in the Marines and training to be a Marine Scout Sniper. The team is exc 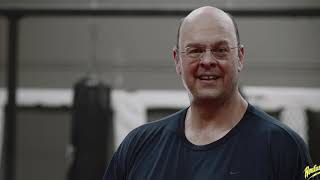